Shortly after opening a client drawing my mouse continuously paused every time I moved the mouse over points. I thought this was due to QP being on at the bottom, but it continued after I turned it off. I also noticed a couple of hundred point styles and about that many labels styles. I blamed that until I opened a new drawing with NSC template and imported all of these styles. I soon realized it was because of the points in the drawing. To remove annoying pauses from points type CUI at the command line. Locate rollover tips, and unselect display elements for cogo points. To turn all rollover tips off at once type it at the command line and enter 0. 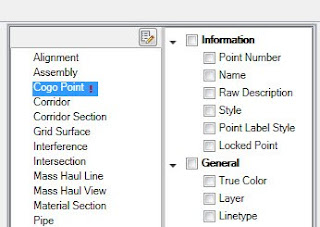 Posted by Chad Studer at 1:25 PM No comments:

Email ThisBlogThis!Share to TwitterShare to FacebookShare to Pinterest
Labels: Cursor pauses are annoying

Shortly after opening Civil 3D 2011 you will open your existing 2010 files and the dialog box below is displayed. 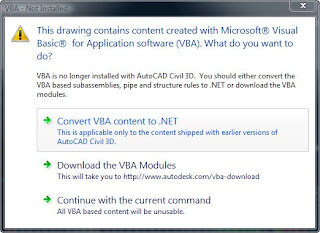 Below is an explanation of each option, the short version is to convert to .NET if you started using Civil 3D in 2009 or 2010. I have downloaded the VBA module to remove the error every time I open a drawing in a previous version and I convert VBA-based subassemblies to .NET to achieve optimal performance when generating corridor models.

Convert the VBA content to .NET, this will enhance performance (corridor design). It is not recommended to convert the data if the pipe rule set was modified in Civil 3D 2008, or earlier versions of Civil 3D because you will lose any VBA changes you made to C3DPipeNetworkRules.dvb.

The 2nd option – recommended to remove error message and for 2008 or later dwgs.

I would only suggest downloading VBA for anyone using VBA, tired of receiving the message or are working with modified rule files from 2008 versions. If you have downloaded VBA Modules you can still convert to .NET by simply typing _AeccConvertVBARulesToDotNet at the command line for pipe rules and _AeccConvertVBASAsToDotNET for Assemblies and subassemblies.

The 3rd option – not recommended

The only reason I can think of, would be if you can’t download the VBA data or not going to save the drawing in 2011. I was hoping this option would allow opening drawings in 2011 and still sharing my drawings with 2010 users, but it didn’t prevail. Like prior versions once the object data is saved in 2011 it shows as proxy objects in prior versions.

*Civil 3D Object data must be exported as XML and imported for previous versions to recognize them for editing.

*Not sure what version the pipe rules were created in? Download VBA, the error message will not be displayed and the only thing you may notice would be some performance when applying rules. Besides a single network can have a mix of parts that point to VBA-based and .NET-based part rules.
Posted by Chad Studer at 10:53 AM 3 comments:

The first time I opened Civil 3D 2010 and saw the RIBBON my head spun around like the girl in the Exorcist. Remember that movie? I will spare you the pictures of it, but I’m not kidding; everything I learned up to that point in Civil 3D had been moved or modified. I couldn’t believe it, and I didn’t see any advantage at the time. After taking a deep breath and spinning my head back to the forward direction I have become a custom to it. Pick any Civil 3D object and the ribbon automatically arranges commands to help you find the correct tools.
Now, I was taught back in the DOS days that the fewest amount of clicks made users more efficient. So using the ribbon choose the modify tab, actually pick any tab except for Home. Notice the layer option is gone. It will take one click to select home and another to get back to layers. An easy way to set the most common commands is to modify each ribbon or easily assign them to the access toolbar.

Posted by Chad Studer at 9:46 AM No comments:

Follow by email to get instant updates as released